My life is made up of visions of things ahead of me (at a distance -- possibilities, dreams, tragedies) and behind me ("young lovers try to get a grip on what they tasted in that kiss") but my headlights are notoriously bad at seeing what is right in front of me. Like tomorrow or the next day. When I have a car to drive.

I am a helicopter floating over a landscape with spotlights showing spaces around me at night. In the day I see ridges ahead and the shape of continents outlined with mystical clarity around them.

I have learned to land and take off  but usually have to hop a ride on a truck or train or ship to move across the land.  My daughter's invasion of this planet has made landing the helicopter and walking around much more regular and worthwhile.

I talked to a car operator recently. She gave me tips for navigating roads. She reminded me how to switch the headlamps on and off, testing that they are working. Turn signals too. It was a little embarrassing to admit this was more like grade school than continuing education for me.

But she may need a helicopter ride someday. Or not. Which is also ok.
Posted by Jonathan Reuel at 7:15 AM No comments:

Why we need critics

A good music critic pays both the artist and the public a service in two ways: 1) They point to, name, describe and invite others to discover greatness that would otherwise be missed, 2) they act as a watchdog against shoddy, unoriginal work – calling artists to work harder and the audience to look deeper. A worthy critic sees hidden qualities which they reveal in artful, compelling prose.
Posted by Jonathan Reuel at 6:30 AM No comments:

Words from a Friend

My last post was a very useful "scorching" review -- an attempt to look at the Reuel Ropp EP from a distance and judge it... written by Zac Garver.

Different kinds of voices help the artist grow and are necessary to get us to making better art. The critic's voice is one of those. Another is the voice of a friend who has tracked your development as an artist over time and can speak to your work on those terms. What a gift!

Here is what my friend Andrew Kreider wrote about Future Past Present:

I loved listening to this EP.  Congratulations to you both – you have four strong songs here.
The playing is strong throughout.  Love the harmonica and big reverb on Carry On.  So atmospheric.  The multiple guitars on Graveyard and its whole vibe reminded me of Elbow in the heights of The Seldom Seen Kid.  Awesome.

Again, I want you both to know how impressed I am – keep going!

Jason:
The hypnotic rocking of Graveyard with its soaring melody lulls the listener with its deceptive simplicity, while Carry On has a strong inner momentum that underlines the courage of moving forward -  the hope that “someone’s plotting better days.”  Carry On ends with this simple offering, “And every step I take is all I have to give anyway.”   Many of us could hope to say as much.

Jonathan:
These days, Jonathan writes like a grown man, no longer a youngster– informed by loss, casting his gaze back over terrain he keeps crossing at slightly different angles, starting to discern the shape of a calling that has always been there.  As he rightly puts it, with our deepest calling, it “takes a life to accept it.”  In the end, there can be deep stillness in embracing what has come to be, and these songs show a glimpse of the promise in that struggle, the gift of being “exhausted but rested.”

With the underlying sense of hope that runs through the whole project, it’s fitting to end the EP on the image of the skies opening after rains – on the line “blue is the sky.”

If there were more reviews like this in my circles, we'd be better artists and listeners would be challenged to use their brains and their hearts when they listen, and to expect something worthwhile...

Great albums are like wine and spirits. Some are 40% strong and best taken in shots or cocktails, while others are 10-15% and should be sipped all evening. The “strength” doesn’t indicate quality or excellence — that would be facile.

After quite a few listens to Past, Future, Present, I suspect that collaborators Jonathan and Jason aren’t quite sure what they’ve made — unaware of how the chemistry has altered from inception. To make matters worse, wines change in the bottle, and the human palate is more than fickle. So too for music.

This album harkens to a school of brewing that employs open vats, wild yeasts and the serendipity of nature — the results are rarely reproducible and thus never commonly available.

I heard brilliant moments on this album. The first track, “Graveyard” is not one of them. I’m no student of music theory, but I kept thinking “this sounds off.” Perhaps musicians will appreciate it— like Coltrane’s Ascension (not an easy drinking spirit, if you will). “Graveyard” is a song about death and I hear the minor chords and meandering scales as an attempt to express the weirdness of death, the simultaneous beauty and sadness. I just can’t shake the sense that this track is two people who aren’t playing from the same song sheet. Like jazz but without the groove. Let’s call it an experimental cocktail that you only order one of.

“Some Dream” on the other hand is glowing. The rumble of Jonathan’s voice and the hum of the guitar took me back to the first time I hit “play” on Jeff Buckley’s “Live at Sin-é.” Lyrically it’s vague, and that’s where it falters (to be fair, Buckley’s “Mojo Pin” is vague and about a dream as well). I want to drink this song all night, but the lyrics keep getting in the way, like sediment or garnish floating on top. I kept asking “What? Which one? This one? That one? One what?” I hear this song as an invitation to self-identify with “some dreams,” plugging in whatever dreams, hopes, and failures I carry. And even though the vagueness felt hasty, this is the track I put on repeat.

“Carry On” is a trolly car rattling through a sleepy town at twice the normal speed. It’s trying to sound and act like a much bigger train. The rhythm of Jason’s guitar and the lonely distant whistle of Jon’s harmonica are gorgeous together. I want to ride that rickety trolly car into the sunset.

Lyrically it lacked the weight that I wanted. Like a beer with great initial flavor, but little complexity — you don’t drink it all night. Even so, this track shows Jon and Jason collaborating at their best, not to be missed or glossed over.

“Green” puts you on a misty hill, in the rolling Appalachians. Close your eyes and you might hear a bard crooning in a dell, but the piano pulls you back and you’re in the auditorium where Jason is putting the keys and piano wires to righteous work. This is very possibly the best track — well composed and executed, with lyrics that keep you focused. It’s no rock ballad, it’s not rye whiskey, or even a tawny port. “Green” is a pre-prohibition cocktail, it’s fresh, bright, but has the antique complexity and depth that you rarely find in a song. The texture of the track — voice, piano, violin (or cello?) and the rustle of the musicians — all comes together unlike the rest of the EP.

Keeping with the cocktail analogy, it’s as much about proportions as quality of ingredients. Finding the right balance is tricky, that’s where a master bar-tender, distiller, or winemaker comes into play — or in the musicians’ case: a producer. For Jonathan and Jason, I think they have the potential to be an astonishing duo — with the right producer. All the right ingredients are there and they’ve found some impressive combinations on this record. I want to see them do a better job perfecting what’s amazing, instead of letting the wild yeast go too far.

In closing, this EP is worth adding to your library and improves with repeated listening — a quality found in the best spirits, wines and albums.

I find scattered flip flops on this Lake Michigan beach
More to the point, a flip flop
In decent condition, surprisingly
Not softened like bottle shards into jewelry fodder by waves and sand

It looks both satisfied and forlorn

I'm serious about making things: songs, drawings, a difference... and part of being creatively serious is playing.
A while back I was hanging out with Christa's family, and whenever the nieces and nephews are around we do art. For some reason that day we made masks. This is my Einstein mask. I'm posing in front of Christa's sewn paper wall piece with my "memory ray gun" which I made using paper bags, toilet paper rolls and old photos. You aim the ray gun at something (visible or imagined) that you would like to remember more or less vividly and press "enhance" or "fuzz" on the gun. Imagination exercises do help retrain a part of your brain that can atrophy if you let it.
And it's kind of fun. 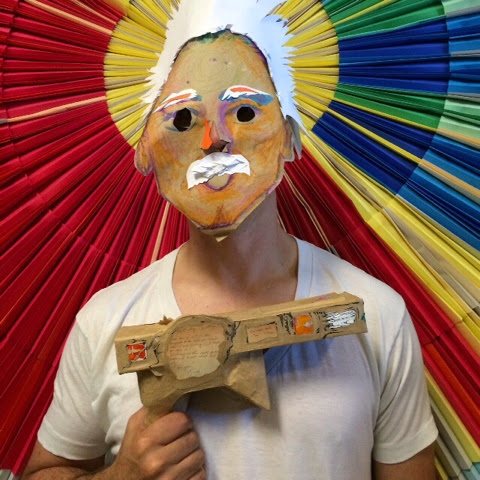 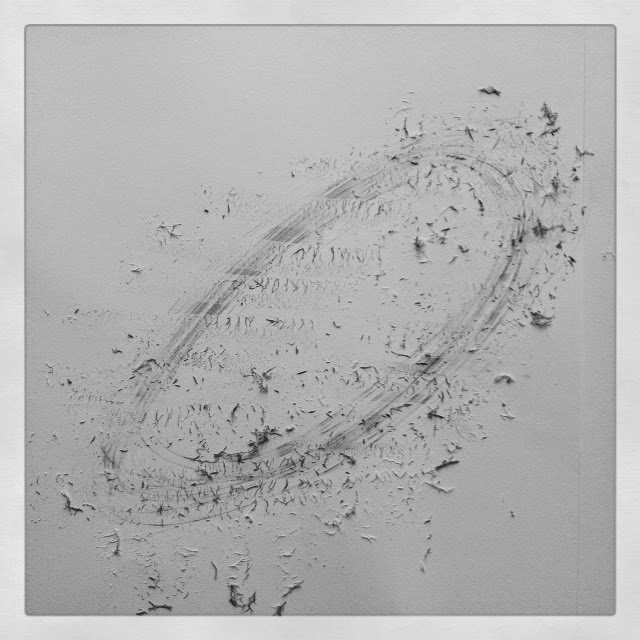 This is a detail from a piece with the working title "Removing Art."

I've been thinking about how religious subcultures relate to art. One way, one phase, is removing it. This is sad. It can be devastating. It can be small minded and stupid, and often is.

And. . . it can also clear space for something different, something new, like forest fires re-calibrate local ecosystems. Is there a place for book burning? Flag burning? Our most sacred personal, religious and national symbols deserve respect but also reexamination and challenge from time to time. Jesus kicks over the money changers' tables in the temple. Hooray say the artists while the business people scratch their heads or call their lawyers. But...

If I, as an artist, am unwilling to accept the possibility of (let me say it stronger -- if I don't expect and look for) times and places where removing art or music is the right thing to do (rather than making or promoting it), I may find myself in the same boat as the money changers who could not imagine that what God desired might require them to... step aside.

(Please excuse the Melvillian hack of a run on sentence.)


Posted by Jonathan Reuel at 10:34 AM No comments: